The place got its name from the river Varadha flowing in front of the temple. Earlier this place was called Varadhala. But later due to the english influence on the pronounciation, it is thought that the name got modified from ‘dha’ to ‘da’ and finally, it became PERDALA. 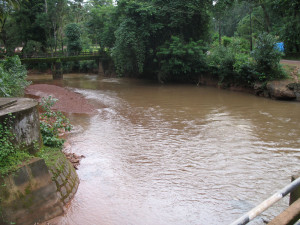 According to a legendary version, the idol of Lord Udaneshwara was brought from Kashi(Banarus)by an ascetic of the yore at about 800 years ago and was installed and consecrated by him. The idol (Shivalinga) of Lord Udaneshwara is a naturally occurred one (not carved one) as the ascetic got it from the river bed, while having a dip in the holy river Ganga. The idol is having a slight convexity at the left side. It is believed that this convexity reflects the presence of ‘Uma’ (spouse of Lord Shiva) with Udaneshwara conceptualizing the nuptial auspiciousness of Uma-Maheshwara wedding. This also symbolizes the conjugation of prakruthi-purusha. Realizing this significance so many devotees offer to perform Uma-Maheshwara pooja to propitiate   and invoke the benediction of the Lord.

Scholars interpret that the very word Udaneshwara signifies that Ishwara means Lord almighty who lifts the very human soul from the cage of physical body and reunites it with the eternal soul; i.e, god almighty. Sri Udaneshwara lifts the devotees from the mundane sufferings and rechanalises  their soul in the right path of eternal bliss, the salvation.